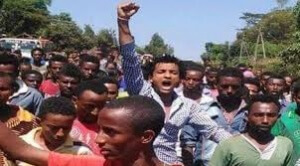 Oromo protest for Freedom and Democracy started in the last week of November. We are now on the first week of January and the people still continue to resist Tigray Libration Front (TPLF) fascism. The  TPLF army is continue terrorizing the peaceful demonstrator who reject TPLF system of domination. We have seen a disturbing pictures when school kids are killed  using bombs, pregnant women murdered by army, teacher executed in front of his student, school girls rapped by Agazi army. We have to understand the Tigray fascist mindset, they think if they commit gruesome crime the citizen become servile for Tigray war lords.  But for  the people it is about existence and survival, they either abolish the Tigray fascism (TPLF system of domination) or die. No other choices, because if they do it is a disgrace for a humanity and  a shame for our society.

We heard a lot of comment from Tigrigna speaking TPLF supporter in a social media when they openly propose more killing to pursue TPLF land grabbing policy. They say  China killed million of citizen to be where the country is today. For the Oromo, it is about survival, it is about pride. It shame for the great people to be dominated by a few gun tattler. The people know the TPLF agenda, they want to subjugate the people to accumulate wealth.  We remember the genocide TPLF committed  on Anuak people On December 13, 2003. Members of the Ethiopian military and militias formed from non-Anuak minority groups entered Gambella town in southwestern Ethiopia. Over the course of three days, they sought out, tortured and killed 424 men, burned houses, and scattered families. Since that time, the genocide and crimes against humanity have continued, raising the death toll between 1,500 and 2,500, and causing more than 50,000 Anuak to flee (read more). We know what happened after that, the land grab policy dominated TPLF members widely executed in Gambella.

Up to know more than 150 people murdered by TPLF army, more than 2000 injured and flooded the hospital, more than 4000 opposition members jailed and more than 30,000 people jailed in concentration centres. Still, the Tigray fascist like Abey Tsehaye and Getachew Rada vomiting on the people,they are still vowing to kill more. The people continue rejecting TPLF fascism, it is about time the fascist regime will derail to hell.

Freedom for the people! A prison that holds the largest political prisoners in the region...