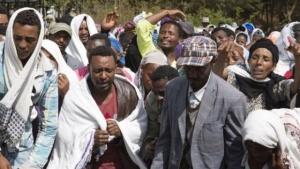 The protests have been sparked by fears that a plan to expand the capital’s administrative control into the Oromia region will displace Oromo farmers.

HRW also called for the release of an Oromo politician arrested last month.

The government has accused Oromo protesters of links with terror groups.

Last month, officials said five people and an undisclosed number of security personnel had died in the protests.

Prominent Oromo intellectuals “who they feel have influence over the population” have also been targeted by the government, HRW researcher Felix Horne said in a statement.

“He was first taken to the notorious Maekalawi prison, where torture and other ill-treatment are routine,” it said.

“The 54-year-old foreign language professor was reportedly hospitalised shortly after his arrest but his whereabouts are now unknown, raising concerns of an enforced disappearance.”  Read more