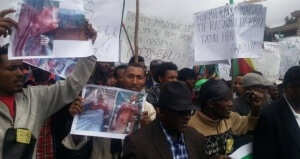 (Global voice) Since the beginning of November 2015, at least 140 peaceful protesters have been killed in Ethiopia according to Human Rights Watch. Photo and video evidence suggests that most of the people were killed by bullets fired at close range.

There are also reports by Oromo rights activists indicating that at least 10 individuals died from torture inflicted while they were in prisons.

University students, women, farmers and school teachers have all been victims of government violence.

Among the dead, more than 70% are male students. Male farmers account for about 20% of the deaths.

The remainder are women. A seven-month pregnant woman along with her sister-in-law were killed while they were running away to escape arrest.

It was reported their bodies were discovered in scrub-land days after their disappearance.

Below is an interactive map created by this author with help from Oromo activist Abiy Atomssa. The map lists 111 people that have died during the protests in recent months.

We ask anyone who has evidence of the deaths or disappearance of protesters to contact us via editor@globalvoicesonline.org. Read more Top secret from Tigray fascism (TPLF) about Welkait and Oromia A short video that exposes TPLF contradictory lies on OromoProtests