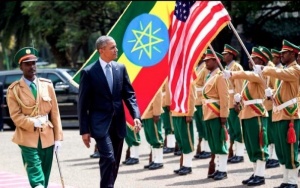 (globalriskinsights.com) Ethiopia is experiencing increased levels of instability, calling into question the notion that Ethiopia is ‘rising’, but such issues are unlikely to have an adverse impact on the economy in the long-term.

Ethiopia is facing a number of sensitive challenges which have arisen in tandem with its impressiveeconomic growth rates, which the World Bank claims will result in the country reaching middle-income status by 2025 thanks to the government’s astute economic decision-making.

Exciting developments continue to emerge from Ethiopia into 2016. On 5 January, the Ministry of Foreign Affairs announced plans to increase regional trade links with Sudan, South Sudan, Kenya, Somalia and Kenya, supported through the government’s increased investments in infrastructure linking the neighbouring countries.

In addition, Ethiopia’s large coffee industry is set to play an increasingly important role in the country’s economy. According to recent reports, Ethiopia will likely increase coffee exports by 45% due to government initiatives, with coffee exports already earning around 30% of Ethiopia’s hard currency.

Furthermore, the Ethiopian government is implementing an Urban Productive Safety Net Programme costing USD 559 million. Efforts such as this, complemented by continued economic growth have reportedly decreased poverty levels to 29%, down from 60% around 20 years ago.

As Ethiopia develops, its capital city, Addis Ababa is also set to expand, a source of significant controversy and instability. There are plans to utilise farmland surrounding the city for business parks which expand into the Oromia region. This has sparked protests met with a severe government response. On 8 January, it was alleged that security forces were responsible for killing 140 people in a crackdown on protestors. In turn, Human Rights Watch claims that the country is on a “dangerous trajectory” posing risks to the country’s long-term stability.

Ethiopia’s government is likely to depend on its continued economic performance to maintain internal and external legitimacy. Yet, those who do not feel the benefits of economic growth will continue to perpetuate social unrest, a potentially serious risk, given that the Oromo, the affected ethnic group in the case of Addis Ababa’s expansion, account for 40% of the population. Responsive to the current protests, the government has decided to halt its Oromia expansion plans.

The government’s continued management of social unrest will be decisive in determining its long-term stability. If the government fails to manage human rights issues sensitively, then increased frequency of protests and crackdowns could cause substantial problems economically. Foreign investors may be deterred in an attempt to avoid reputational risks, a problem which would be enhanced if the US begins to pull back from supporting the Ethiopian government.

Ethiopia’s relations with the US may be taking a turn for the worse, despite the two countries’ strategic counter-terror relationship. There have been increasing reports of heavy handed government responses to journalists expressing dissent, including imprisonment. In response, the US spoken out, an unusual move as the US rarely addresses human rights issues in Ethiopia. Consequently, the US decision to comment on the Ethiopian government’s actions may represent a growing rift between the two.

Increasingly strained US-Ethiopia relations may have also influenced the US decision, on 4 January, to shutdown drone operations in Arba Munch, Ethiopia. These emerging trends would not bode well for Ethiopia economically, with Western investors likely to be discouraged from entering an increasingly controversial market. The impact would be limited, however, as Ethiopia continues to attract substantial FDI from China and the Middle East.

In the long-term, despite recent instability, Ethiopia’s economic outlook remains very positive and will ultimately serve to benefit its broader population. High economic growth rates will ultimately function to mitigate an overarching trend toward instability as Ethiopia continues to rise, but such growth will need to be inclusive, especially for the millions who have been affected by the recent drought.

However, the recent increased incidences of social unrest could spark a degree of political instability undermining growth, in the short to medium term, if the government fails to ensure that communities affected by development plans are compensated for disruption. Additionally, displaced or marginalised communities, and the potential for continued heavy-handed governance, may increase security and reputational risks for the many multinationals excited about the opportunities that Ethiopia holds. UNDSS internal memo regarding the situation in East Shawa & West... Oromo Scholar proposes the foundation of a national council of Oromia