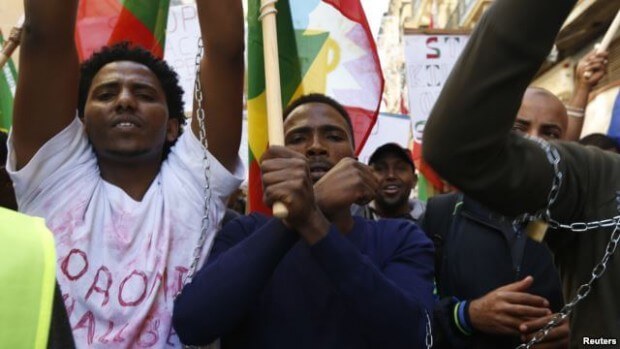 (VOA) After almost two months of clashes between Oromo protesters and security forces in Ethiopia, authorities have scrapped a “master plan” that would have expanded the boundaries of Addis Ababa and, according to protesters, would have displaced Oromo farmers.

However, observers are divided on the significance of the move by Ethiopia and whether it truly represents a change of policy or just a reaction to negative publicity.

Dr. Awol Allo, a fellow in human rights at the London School of Economics, said he believes the government will find other ways to seize land it deems useful.

“I don’t actually believe that the practices of displacement and the eviction and the plunder would cease,” Allo told VOA. “Remember, the expansion of Addis began a very long time ago and it has intensified over the course of the last 10 years because of the influx of investment into the city, both foreign and domestic.”

Allo pointed to figures compiled by jailed Oromo activist and opposition leader Bekele Gerba, who said 150,000 Oromo farmers have had their land taken by the government over the past 10 years.

“The practices would continue. They just don’t call them a master plan,” Allo said. “The master plan was basically intended to sort of basically formalize and legalize the processes of annexation and expansion. It may not have that kind of name that gives it a broader mandate, sort of legitimacy and authority, but the practice would nevertheless continue.”

Earlier this week, the European Parliament adopted a 19-point resolution urging Ethiopia to respect the rights of peaceful protesters as well as to cease intimidation and imprisonment of journalists. During a recent visit to Ethiopia, U.S. Ambassador to the United Nations Samantha Power urged the government to engage in dialogue with protesters.

Approximately 140 people were killed during the protests, according to activists interviewed by Human Rights Watch.

“What we are urging is that the international community should not turn a blind eye to these gross violations of human rights that have taken place in Ethiopia,” said Mandeep Tiwana, head of policy and research at CIVICUS, a group that works to strengthen civil society and civilian participation in politics.

“They should diplomatically engage with Ethiopia, institute external inquiry into this matter and also bring to court those responsible for excessive force. And it appears that security forces have used excessive force against peaceful protesters, and, in fact, there are reports that even children as young as 12 have been killed,” Tiwana said.

The government has confirmed that 13 security forces died in the clashes. VOA made repeated requests for comment from the Ethiopian Embassy in Washington, D.C., but has not yet received an official statement.

The protests come at a particularly difficult time for Ethiopia, as the worst drought to hit the area in 30 years has caused a famine that is particularly affecting the northeast region.

The aid group Save the Children says as many as 10 million people need food aid. It calls this one of the two worst humanitarian crises in the world, following only Syria.

But observers hope the international community’s desire to aid those affected by the drought will not prevent it from insisting that Ethiopia respect human rights as it pertains to the Oromo protests.

Muthoni Wanyeki, Amnesty International’s regional director for East Africa, the Horn and the Great Lakes, said her organization and others are calling for three additional measures following the master plan’s cancellation.

First, they want the unconditional release of the people arrested during the protests. They also want an independent investigation of police conduct, and they are calling for a national dialogue about policing and demonstrations and what is appropriate during protests.

“It is a sign of good faith that the government canceled these immediate plans,” Wanyeki said. “I think the pressure from the community and from all of the people that put aid into Ethiopia’s much-wanted development progress need to insist on standards around projects like this.”

Under Ethiopian law, all land belongs to the government, and people who are relocated are entitled to compensation.

However, the constitution specifically protects the rights of pastoralists and their right not to be displaced from their land.

Allo said proper compensation and due process have not occurred in the Oromo region around Addis Ababa.

People’s “entire livelihood is inextricably tied to the land and land means everything,” he said. “Their property is a way of living for them, so to deprive them of that possibility – that prospect of leaving the land that they have known, in the ecologies that they have known, without proper consultation, without appropriate compensation – I think that is a huge injustice.”